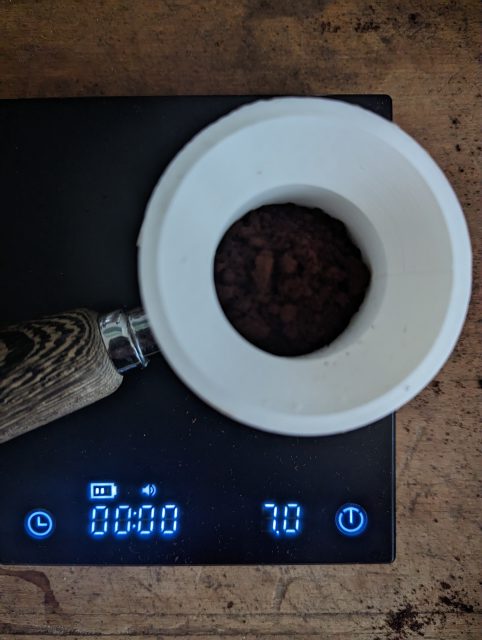 As a coffee lover, you often found yourself craving the rich, bold flavour of espresso. However, brewing a single shot of espresso could be a real challenge – the small size of the basket makes it difficult to get the right amount of coffee in without making a mess, and using a regular tamper is nearly impossible. I saw some single dosing funnels online, but I did not know if they would fit and be worth the price.

That’s why I decided to take matters into my own hands and design a special dosing funnel and tamper specifically for the IMS competition single basket*.

Using 3D drawing program Fusion 360 I designed a dosing funnel and tamper that would make it easy to precisely dose and tamp small amounts of coffee.

I printed the dosing funnel using my old Prima 3d printer. You can download the STL files to try them out.

Preparation of a single shot is simple now. The dosing funnel fits the basket precisely, allowing to fill out the perfect amount of coffee without any mess. The accompanying tamper makes it simple to evenly compress the coffee shot. The final result was a small delicious espresso without a mess.

I found that the dosing funnel and tamper are especially useful when you want a smaller, amount of espresso. Whether you crave a single shot in the evening or want the flavours of a particularly special coffee, the doser and tamper make it easy to brew it every time.

The funnel and tamper in action, video by Frans

Some pictures in random order